We are a progressive, diverse university and our leadership reflects that. We come from many different backgrounds, many different places, and each of us brings something different to the table. It is these very contrasts that allow us to look beyond the expected as we share the responsibility and commitment to ensure the success of our students in their academic goals, personal lives, careers, communities and whatever other endeavors they may choose to pursue.

Our graduates go on to become involved, caring and contributing members of society, who seek to make a positive imprint. It’s the best lesson we teach. 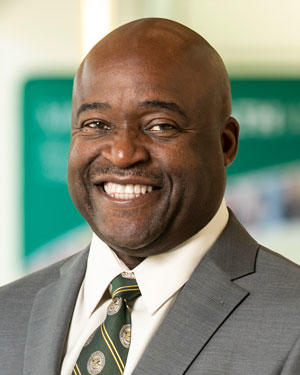 In his seven years at UCI, Washington expanded undergraduate and graduate enrollment in the engineering school and recruited and hired one of the most diverse engineering faculty cohorts in the country. In addition, he established the University of California’s first student makerspace and launched the OC STEM Initiative, one of the nation’s first STEM ecosystems, in Orange County, California.

Washington created new graduate and undergraduate programs with the UCI business and humanities schools and led the development of the Horiba Institute for Mobility and Connectivity to advance next-generation advanced mobility systems.

Washington began his academic career in 1995 as an assistant professor in the Department of Mechanical and Aerospace Engineering at Ohio State University and served as interim dean of the engineering school from 2008 to 2011. Washington received the Alumni Award for Distinguished Teaching, the Harrison Faculty Award for Excellence in Engineering Education, and the Lumley Research Award. He also received the National Science Foundation (NSF) Faculty Early Career Development (CAREER) Award.

A first-generation college graduate, Washington is a New York City native. He earned three degrees in mechanical engineering, including his PhD, at North Carolina State University.

The Board of Visitors

The Board of Visitors of George Mason University was created in April 1972 by an act of the General Assembly when the university became an independent institution. The board is a corporate body serving under the leadership of a rector, vice rector, and secretary.

Without limiting the generality of its powers, the Board of Visitors exercises its authority principally in policy-making and oversight.

Mosaic tile
Visit the Board of Visitors Website
For bylaws, agendas, and schedules